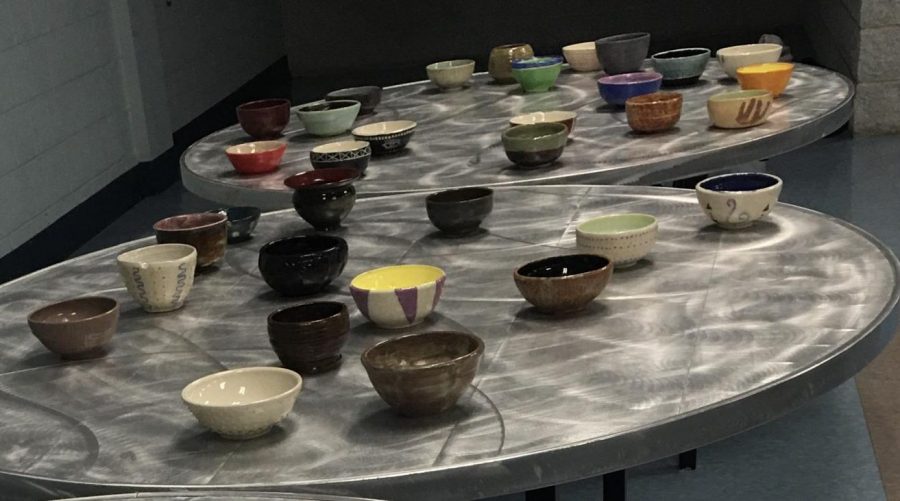 Soup bowls for this year's Soup for the Soul fundraiser.

The Staff of The Compass

Here are a few highlights from the past few weeks at Falmouth High School:

On March 5, Falmouth High School’s art and culinary departments teamed up to put together this year’s “Soup for the Soul,” an annual fundraiser that helps raise money for the ceramics program.

“Soup for the Soul” started 30-35 years ago with Mrs. Yorke. After she retired, Mrs. Adams continued the event.

The message of “Soup for the Soul” is simple: eat dinner and leave with a bowl as well as a smile. “It’s really fun you get to go home with a bowl and you get really good soup,” said junior Maria Kraig.

Abby is the top-ranked female high school athlete for shot put in Massachusetts. She won the MIAA Division IV Championship over the other top-ranking athletes in her class with an indoor personal best.

Abby and her family were filled with emotions after she won. “I was excited, but I think my mom was more excited than me,” Abby said.

The 42nd annual Falmouth Science and Engineering Fair was held at Falmouth High School on February 29.

Students from kindergarten to the high school displayed their projects competing for cash and scholarship prizes.

The Science Fair allows kids to get interested in the practical side of science and teaches good working habits,¨ said Mr. Gordon, who teaches chemistry and biology here at FHS.

The ceremony included a potluck dinner where students brought in a variety of dishes from entrees to desserts. All the items were inspired by famous artists. Some of the hits were Van Gogh cupcakes, Pollock Rice Krispies, and da Vinci pizza.

“It feels good to come together and celebrate our accomplishments, and it’s awesome that people from the community came to see that,” said art student Callie Shank.

At Least 30 million people of all ages and genders suffer from an eating disorder in the U.S.,” according to The National Association of Anorexia Nervosa and Associated Disorders.

Ms. Sharon O’Connor, one of our Falmouth High School nurses, said that eating disorders are a problem that affect students in our school.

Ms. O’Connor also explained that there are supports for students who need help. FHS works with Walden Behavioral Care. Students can reach out to them directly or speak with an FHS nurse.

Around the globe since the middle of January, there have been growing concerns about the Coronavirus that began in Wuhan, China.

As of March 6, According to the Centers for Disease Control and Prevention, the total confirmed cases in the United States is now at 164 individuals with 11 deaths.

The actual number of cases cannot be 100% confirmed because of initial problems with testing kits.

Schools in Japan, Italy, and China have shut down to prevent the spread of the virus.

On Tuesday, March 3, The Woods Hole Diversity Advisory Committee partnered with Falmouth High School’s Diversity Group as well as Falmouth Academy to present “Listen Up!,” a public forum that gave students a chance to speak about their experiences with race in the community.

Each story was previously recorded, a way to make the students feel secure and boost participation.

“Everyone would sit in silence, soothing music would play, and then a story would be read out loud, a moment of silence in between each recording,” according to FHS Assistant Principal Mr. Henry St. Julien.

Mr. St Julien also described the experience as “powerful” and “a chance to take in change.”

There will be another “Listen up!” on Thursday, April 19 here at Falmouth High School.