Concussions Are on the Rise: Here’s What You Should Know 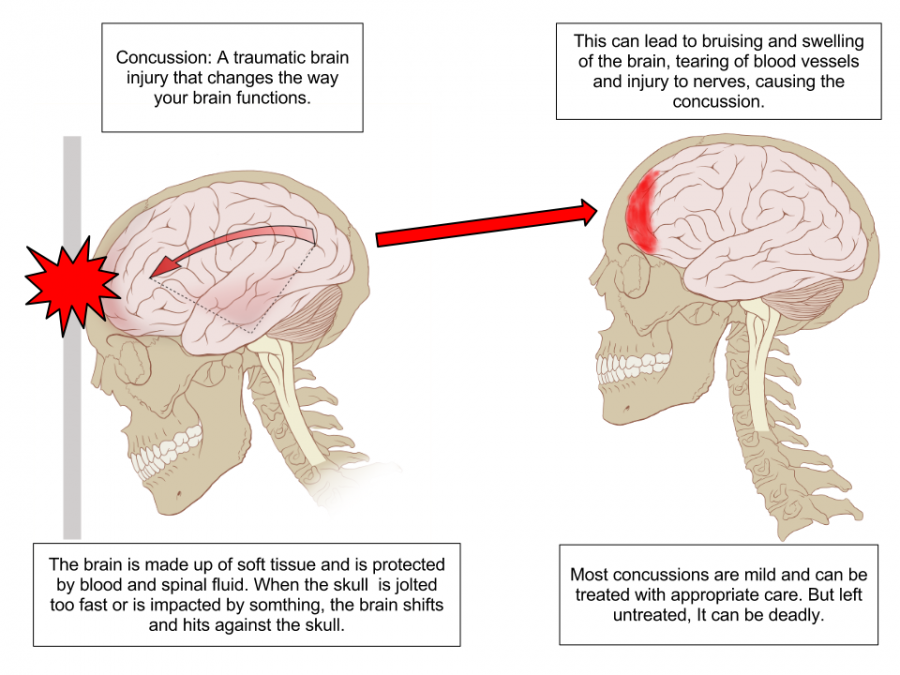 Anatomy of a concussed brain

According to the FHS nurse’s office, over the past 5 years, there has been an average of 14 concussions a year involving sports at Falmouth High School. This year concussions have been on the rise with 20 concussions reported in and out of school so far.

One way that many people, including kids, get concussions is through contact sports. While sports can be fun to play, you have to engage in safe playing practices.

If you think you have a concussion, you may experience headaches after getting hit in the head, but it can take days, weeks, or months after it happens to get symptoms. One way these brain injuries can become more severe is if the injured athlete returns to play before his or her brain is fully healed. The healing process can last weeks, months, or, depending on the severity of the injury, a whole year or more.

It is important to take time off to heal because if you endure too many concussions, you can get more brain injuries including CTE (Chronic Traumatic Encephalopathy), which is a neurodegenerative disease caused by repeated head injuries. It can severely affect how you think and act.

According to The New York Times, a lot of former American football players have expressed concern regarding this disease. Just like in any town, there are times when kids and teens suffer from these brain injuries. The Centers for Disease Control and Prevention report there were 2.87 million traumatic brain injuries in 2014 with the majority being concussions.

With the rise in concussions here in Falmouth, the coaches are working on how they can limit these injuries. Coach Derick Almeida, the FHS head football coach, has seen what concussions can do to players and the game such as “affecting school work and [a student’s] ability to play on the field.” The Coach also said he is trying to educate himself about recognizing the signs of a concussion. “One thing we do is go to different courses on concussions, and we also meet up with other high school and college coaches to talk about ways we can stop this.”

When it comes to injuries like this, it’s not just the coaches that help with these injuries. Coach Almeida also explained the importance of keeping in touch with the student’s doctors and trainers. “When someone has a concussion, communication is key so we help as much as we can.”

As concussions continue to rise, doctors have started to focus on the younger generation of athletes. Their message is clear: proper healing is essential.