The Gay Straight Alliance Club: a Safe Place for all Students 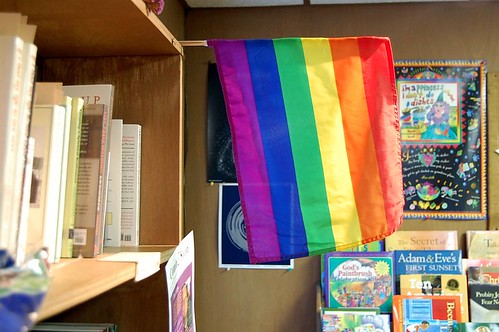 Rainbow flag in a classroom promotes a welcoming atmosphere.

Although membership is low, The Falmouth High School Gay Straight Alliance Club continues to offer meetings every Wednesday after school.  Ms. Sue O’Brien runs the club for anyone who wants to join. According to Ms. O’Brien, she “wanted to be involved with the students who may feel marginalized in the high school community due to their affiliation or allied status in GSA+ Community.”  In addition, Ms. O’Brien talked about the importance of building a safe space for students.

The club has been around for 5 years, but the club “isn’t terribly active at the moment. The biggest challenge is numbers and getting students involved,” said Ms. O’Brien.

Ms. O’Brien talked to students about the low numbers. “The overwhelming response regarded gay students and allies [already having] their own “safe” groups of friends on whom they rely for support. It may be fear of the unknown as well. Fear that students may come to a group meeting and not know anyone, leaving their comfort zone,”  she explained. On that note, Ms. O’Brien said she wants students to know that Room 2086 is a safe place for all.

Even though the club is small now, Ms. O’Brien hopes that it will strengthen over time. Ideally, she hopes the group could connect with statewide and nationwide “parent groups” if the club gained enough members. Most importantly,  Ms. O’Brien is ready to serve the students and wants to make a difference. “There are so many things we could do together to make a statement as a group standing in solidarity with one another.”