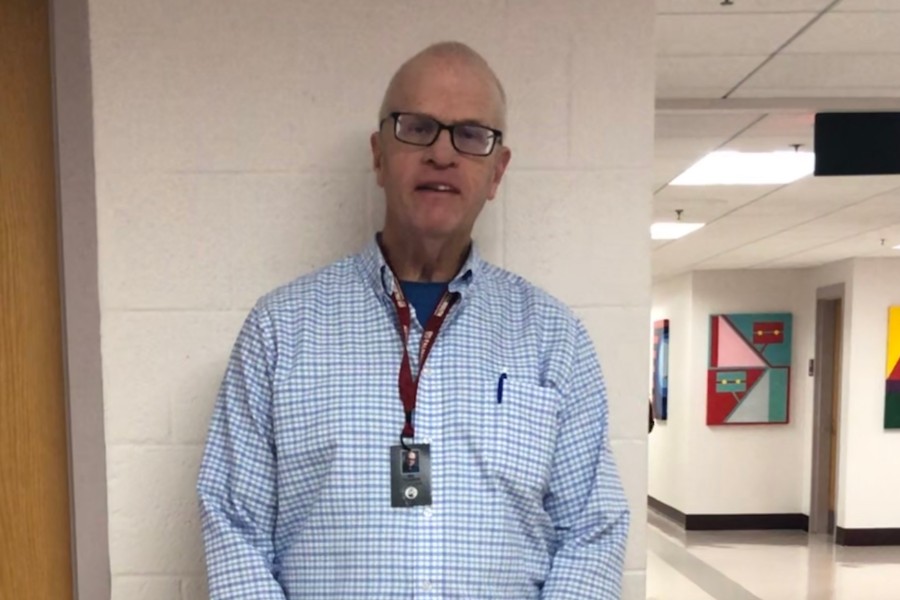 One of the most iconic members of the Falmouth High School staff stands 6 feet 6 inches tall but is a true gentle giant. His name? Mr. Larry Werner. Although his position might be overlooked by some, Mr. Werner, known to most at FHS as Larry, performs a vital role at Falmouth High School.

Mr. Werner has served as a Staff Assistant for 19 years, first working at Lawrence School from 1997-1999 until he landed at Falmouth High School in 2000. “For the first 6 or 7 years, I started off in the student parking lot checking ID stickers.”

Over the course of his career, his other tasks have included breaking up fights, escorting students to different parts of the school, doing library duty after school, and delivering items to students.

With these many years under his belt, Mr. Werner describes some of the benefits and downfalls of doing his job. One of the harder parts of his job is dealing with student conflict, whether a student is acting out in class or a fight has broken out somewhere in the school. Come to find out, that is the only negative part that he mentioned. “It’s rewarding to see the kids who went through difficult times at first turn their lives around to become productive members of the community.”

Mr. Werner recounts an instance where he saw a former FHS student at Walmart, and even though he found it challenging to work with this person at times, they have since become good friends. “It’s amazing to see how they’ve changed and matured, and this often happens when I see former students I worked with, talking about memories from back in the day,” he chuckled.

Mr. Werner began life living in California, where he attended North Hollywood High School.  “The lifestyle of California is so much different than here. There was the warm weather which I enjoyed, but the air wasn’t as clean as it is on Cape.” Larry’s father became ill with cancer, and lost an eye because of his illness. The pollution that lingered in the air didn’t help matters, so in order for him to be well, Larry, along with his mother, Chris, and his father, Fred, moved from the Golden State to Harwich, Massachusetts to live with his cousins.

Later, touching on specific downfalls of California, Larry told me while laughing that “California is a great place to visit, but a pain to live in. It’s hot as hell and the smog will kill you.’’

In contrast to living in California, Mr. Werner discussed life on Cape Cod. “The people are much friendlier here than in California, and everyone knows everyone here. There’s a real sense of community.”

Mr. Werner has formed strong relationships at FHS, including with Principal Gans and fellow Staff Assistant, Mr. Bob Leavenworth. “He takes his role as Staff Aide very seriously, and his top priority is student and school safety.  He is invaluable. Larry has a great rapport with students, he is an extremely hard worker, and he has a great sense of humor!” stated Mrs. Gans.

Mr. Leavenworth may have had only a few words to say, but his admiration and respect was apparent. “He is dedicated to his job, he holds good relationships with people, and has a great sense of humor.  He’s just a really good guy.”

Larry isn’t sure of when he might retire, but when he does, he will have left behind a worthy career and legacy.